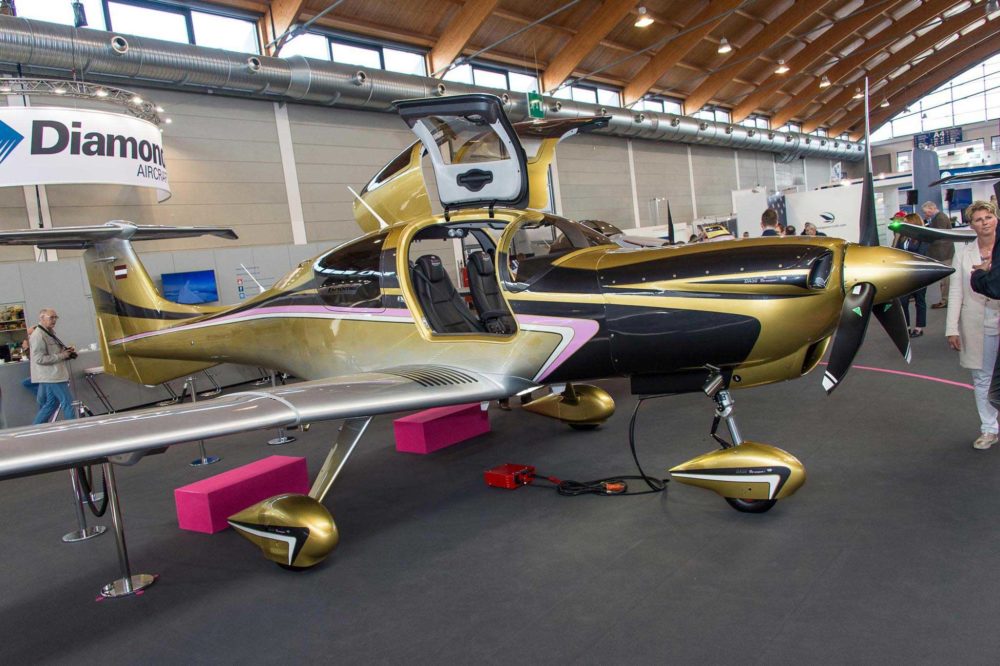 No-one gives a press conference quite like Christian Dries, boss and fount of energy and ideas at Diamond Aircraft. He took to the stage at AERO and proceeded to reel off some of the many projects the Austrian company is working on, some progressing well, some taking an unexpected turn and others completely left field.

To start, Dries showed an aerial view of Diamond’s HQ at Wiener Neustadt Airport in Austria. “There are a lot of roofs,” he said. Where was this going we all thought?

“So, we have developed a special photo-voltaic solar panel that is the only one certified for use at airports because it is non-reflective.” It’s also thin, flexible and can be flush to the surface of the roof, and Dries obliged by showing us a photo of a curved hangar roof with the solar panels mounted edge to edge.

He then headed off to describe progress with Diamond’s factory in Canada, where he recently sold a 60% stake. It will produce DA40 singles with all types of engine, diesel and avgas burning, and from January 2018 also the DA62 twin. Ninety DA62s have been sold, 75 delivered, mostly to North America.

The DA62 will also be available as a special mission aircraft, a pet topic for Dries, equipped with all sorts of cameras and radar which the company has decided to develop and manufacture itself, citing long lead-in times from existing makers.

“These cameras can photograph anything,” he said, including water sources 500 metres below the surface. Recently, they surveyed Wiener Neustadt Airport, where Messerschmitt made 109 fighters during WWII, and found several unexploded bombs dropped by the Allies. “We will remove them very soon,” said Dries.

Next twist: China, where Diamond is working with local authorities to build two factories producing Diamond aircraft. One will make the DA42 light twin, loved by flight schools as an economical Jet-A burning training aircraft. To begin with, these will be for the Chinese market but in the long run, “the world”. It will also manufacture an updated version of Diamond’s two-seater, the DV-20, available with either a 125hp Continental engine or the new 100hp Rotax 912 iS. It will have a Garmin G500 glass cockpit as standard.

Time for a snippet: the two turbodiesel engines produced by Austro, Diamond’s own engine company set-up to replace Thielert (now Continental), have just had their TBOs extended to 1,800 hours with 2,000 hours expected soon.

That led neatly into the big topic: the gold and pink DA50 single-engine aircraft sitting on Diamond’s stand. Gold and pink? They will like it in Dubai, apparently, but it’s to show off Diamond’s new customising facility.

Back to the DA50. “We have lost sales to a rival because the DA40 is not big enough. It’s OK in Europe and Asia but not in North America where people are bigger. Too many McDonalds and too many doughnuts,” said Dries. “The solution is the DA50.”

Yes, the DA50 has a big cockpit but it’s been an aircraft in search of the right engine for years. Now, it will be certified by Q1 2018 with the 230hp 4-cylinder SMA SR305-230E turbodiesel. This will be the first version of the DA50, intended for the training market.

It will be followed by a “true” five-seater tourer equipped with the same engine but recalibrated to produce 260hp. Then a more powerful version using the 380hp 6-cylinder SR460, also from SMA, part of the giant French Safran group, that’s currently in development. And then an even more powerful DA50 equipped with the Motor Sich AI-450S turboprop engine as soon as that engine is certified… you may remember the DA50-JP7 turboprop was shown at AERO two years ago.

The faster, more powerful DA50s will have retractable undercarriage, while the trainer will be fixed gear. They’ll also carry twice as much fuel as the trainer – 400 litres in wet wings.

Dries was keen to point out the double slotted Fowler flaps fitted to the DA50, which allow a slow landing speed and a fast cruise. The fuselage has also been through intensive crash testing, like cars.

Take a breath, we did, Dries didn’t. He upped a gear and launched into Diamond’s hybrid tilt rotor projects. Yes, you read that correctly.

The DA42 E-Star announced a couple of years ago has been canned, because if one motor failed, “everybody on board would die,” said Dries. He doesn’t mince his words, our Christian.

So now the tilt rotor project is much bigger aircraft, with four rotors so that if one fails, there’s redundancy. It will have a turbine engine in the fuselage to provide electricity for the four motors powering the rotors, which can turn upwards for vertical take-off and landing, then through 90-degrees for forward propulsion. 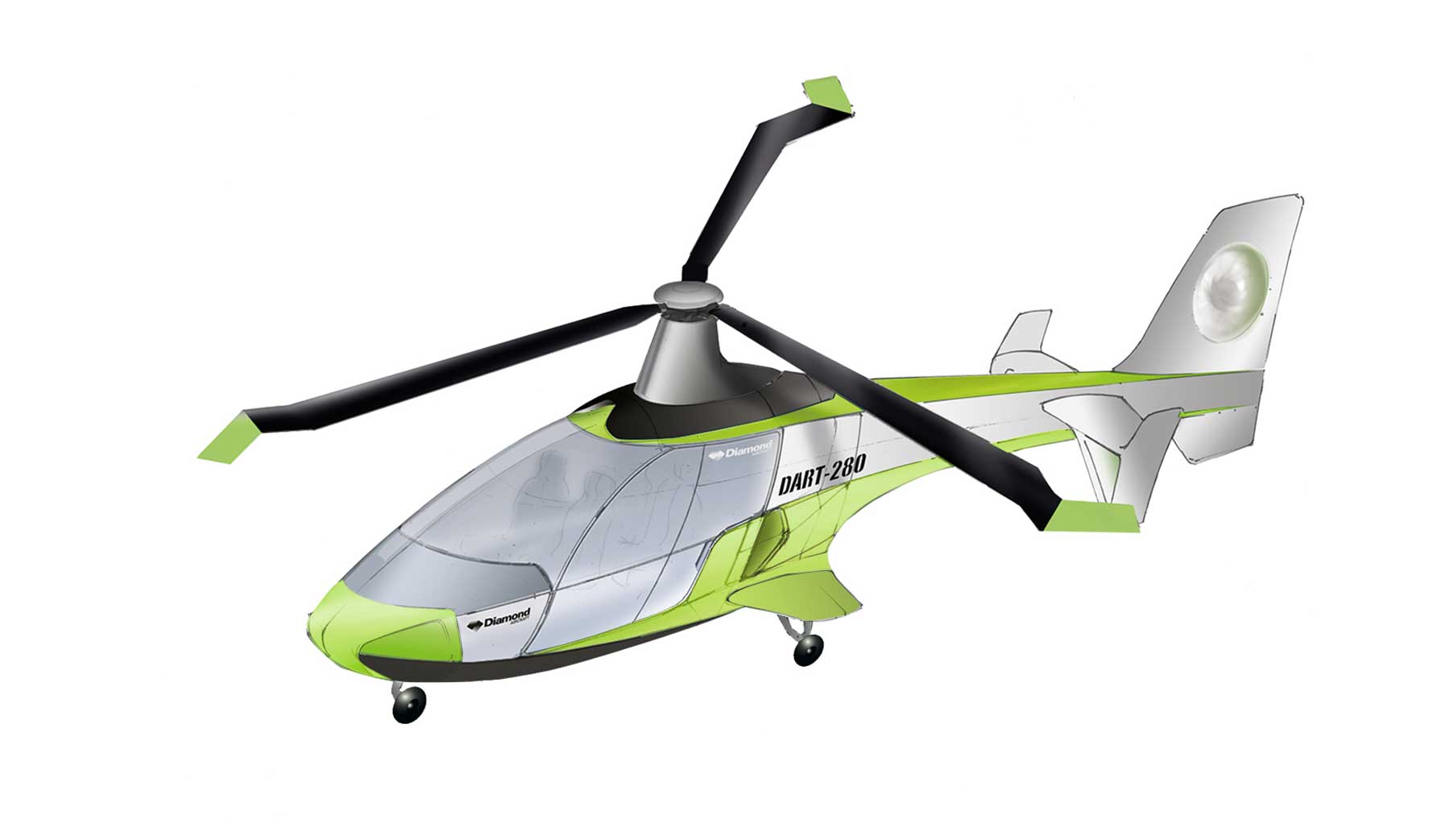 Diamond’s new helicopter project, the Dart 280. [Image: Diamond Aircraft]It’s an 8 to 9 year project, said Dries, so in the meantime Diamond is working on a helicopter which it plans to fly in 18 months’ time and have at AERO in 2019. The Dart 280 helicopter will have a 280hp 4-cyl diesel engine turning the main rotor and an electrically powered tail rotor. This sits in an Airbus-like fenestron with a large fin so if the helicopter suffers tail rotor failure, it still has some straight-line stability to make an emergency landing.

‘Dart’ is the name Diamond is using for its military projects, such as the Dart 450 single-engine turboprop trainer which, perhaps not surprisingly, is also being developed as a reconnaissance aircraft with under fuselage and under wing cameras. Oh, and Diamond has built an airfield specifically for training pilots on the aircraft.